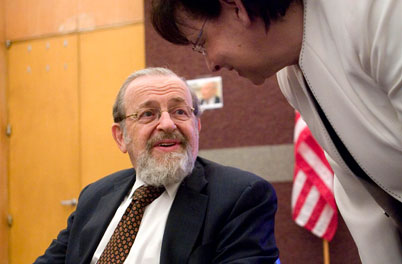 Dr. Norman Lamm—distinguished rabbi, philosopher, teacher and author—was elected president of Yeshiva University in August 1976, succeeding Dr. Samuel Belkin and Dr. Bernard Revel. He was the University's third president and the first native-born American to head the nation's oldest and most comprehensive Jewish institution of higher learning. He served as chancellor of the University and rosh ha-Yeshiva of its affiliated Rabbi Isaac Elchanan Theological Seminary from 2003 until his retirement on June 30, 2013.

Upon graduation, Dr. Lamm pursued advanced scientific studies at the Polytechnic Institute of Brooklyn while continuing his Judaic studies and rabbinic scholarship. He was ordained as a rabbi by YU's affiliated Rabbi Isaac Elchanan Theological Seminary in 1951 and earned a PhD in Jewish philosophy from the University's Bernard Revel Graduate School in 1966.

During the 17 years preceding his election as president, Dr. Lamm served on the Yeshiva University faculty, culminating in his appointment as the Erna and Jakob Michael Professor of Jewish Philosophy in 1966. A pulpit rabbi for 25 years, he served as spiritual leader of the Jewish Center in Manhattan. Prior to that, he served as assistant rabbi of New York City's Congregation Kehilath Jeshurun and then as rabbi of Congregation Kodimoh in Springfield, MA.

Dr. Lamm has gained wide recognition for his writings and discourses on interpretation of Jewish philosophy and law, especially in relation to problems involving science, law, technology and philosophy in the modern world. He has authored 10 books, including The Religious Thought of Hasidism: Text and Commentary, which won the coveted 1999 Jewish Book Award in Jewish Thought.

Rabbi Lamm has edited or co-edited more than 20 volumes, including The Library of Jewish Law and Ethics. He was the founder and first editor of Tradition and associate editor of Hadarom, a journal of Jewish law; founder of the Torah U-Madda Journal; and founder of the Orthodox Forum.