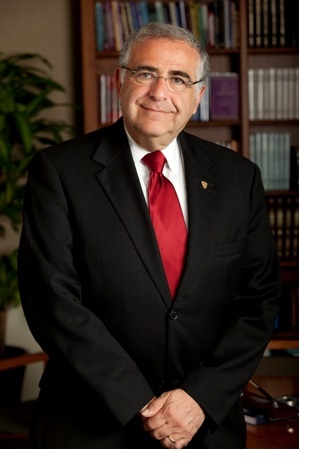 Over his 14 years tenure, Dr. Joel built on the illustrious tradition of this storied institution by placing a renewed emphasis on the student experience, academic excellence, Torah scholarship and communal involvement.

Under his helm, Yeshiva University built the Jacob and Dreizel Glueck Center for Jewish Study, established the Center for Jewish Future, established the Katz School, and developed programs in order to obtain an EMBA, Masters in Accounting, Masters in Quantitative Economics, Masters and PhD in Applied Mathematics, Masters in Marketing, and Masters in SLP.  These initiatives kept YU in the forefront of leading universities, along with expanding the use of technology by launching online education programs on the high school, college and graduate levels.  He was fortunate enough to assemble a remarkable group of academic and administrative leadership that brought luster to all of Yeshiva.

With these advancements, and guided by the distinctive belief in education as a process of “ennobling and enabling” young women and men to build whole and meaningful lives, Yeshiva emerged as North America’s Torah-informed university. Further, with his guidance, Yeshiva Universityexpanded its focus far beyond the walls of the university, whether through professional and rabbinic placement globally or service learning missions worldwide.  This was accomplished with the enhancement of the thriving rabbinical school, via groundbreaking initiatives such as a mental health training program in tandem with Yeshiva’s Ferkauf Graduate School of Psychology.

With his characteristic charm and wit, Dr. Joel was often spotted around Yeshiva’s campuses engaging with students and learning about them; one of his great pleasures at Yeshiva is in serving on its faculty and teaching his weekly course. His devotion to the well-being of the students led to the establishing of new student life programs.  Following his lead, the university has further developed a culture of warmth.

Dr. Joel is renowned as a charismatic leader and a captivating orator, and has traveled globally to dialogue with audiences on values-driven education, communal leadership, and Jewish identity. Just as Yeshiva University has embraced its role as the flagship institution of Modern Orthodoxy, President Joel has in many ways became more than a university president but a true spokesperson for the Jewish people.  It is that aspiration in mind that led to the creation of the annual ChampionsGate program, which brings together lay leaders from various Jewish communities to help advance the Jewish story with the guidance of Yeshiva University Rabbis and professionals.

Before taking the helm at Yeshiva, Dr. Joel earned his reputation as a dynamic force with young people as president and international director of Hillel: The Foundation for Jewish Campus Life. There, he facilitated an extraordinary renaissance of Jewish life on campuses through building numerous new facilities, partnering in the creation of Birthright Israel, and using engagement and empowerment models to reach Jewish youth.

Growing up in Yonkers, NY, Joel earned his B.A. and J.D. from New York University where he was a Root-Tilden Scholar; he has received honorary doctorates from Boston Hebrew College and Gratz College. He also served as assistant district attorney and deputy chief of appeals in the Bronx, and Associate Dean and Professor of Law at YU’s Benjamin N. Cardozo School of Law.

Dr. Joel considers his greatest accomplishment marrying his best friend and partner, Esther, who holds a Ph.D. from Yeshiva’s Ferkauf Graduate School of Psychology. Together, they have six children, all of whom attended Yeshiva University, and eleven grandchildren, who are the great joy of their lives.