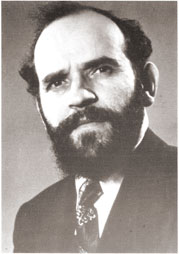 Rabbi Gorelik was born in Telechin near Pinsk and then settled in Rutka. He studied at yeshivot in Lomza and Radin and, afterwards, traveled to study with Rabbi Yitzchok Zev Soloveitchik zt”l, rabbi of Brisk. He remained in Brisk for five years.

During World War II, he moved with his family to Vilna. He escaped from there and ultimately reached America by way of Japan just before America entered the war. Upon coming to America, he served as ram at Yeshivat Tiferet Yerushalayim and involved himself in relief efforts.

In 1943, Rabbi Gorelik was appointed a rosh yeshiva at Rabbi Isaac Elchanan Theological Seminary where he taught Torah to thousands of students until his death. He served as rabbi in the Bronx, established Yeshivas Zichron Moshe and the Beis Yaakov-Beis Miriam in the Bronx, and Yeshiva Gedolah L’Mitzuyanim of South Fallsburg, New York.

He left behind many writings in their original form, as well as a family of Torah scholars and roshei yeshiva.