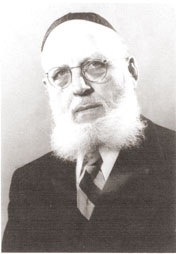 Rabbi Lessin was born in Kapoli, Minsk. He received his rabbinical training in Yeshivat Knesset Yisroel from 1905 until 1912, and was a prominent talmid of the Sabah, the famed Rabbi Finkel of Slobodka. He attended to the personal needs of the Sabah and absorbed his teachings. He received semikhah from Rabbi Moshe Mordechai Epstein zt”l, the noted Slobodka rosh yeshiva, and Rabbi Boruch Dov Leibowitz zt”l, rosh yeshiva of Kaminetz.

He served as a rabbi in Lithuania, specifically in the cities of Gertigoli and Neishtat-Sugind. In 1939, at the outbreak of World War II, he came to America and served for three years as a rabbi in Boston. He founded yeshivot in Chelsea and Dorchester.

In 1942, he was appointed mashgiach ruchani of Rabbi Isaac Elchanan Theological Seminary by its president, Rabbi Samuel Belkin zt”l.

Rabbi Lessin had great impact upon the lives of many students who acquired an appreciation of the fear and service of Heaven from him. He authored three works of mussar: Derech Chaim; Orach Chaim; and Hamaor Shebatorah.