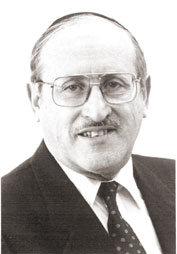 Rabbi Schussheim, son of Rabbi Moshe Schussheim zt”l, was born in Brooklyn, New York. Although he passed away at a young age, he was able to amass thousands of students over the 40 years he served as a rosh yeshiva at Rabbi Isaac Elchanan Theological Seminary.

He was a student of Rabbi Yosef Dov HaLevi Soloveitchik zt”l, whose shiurim he attended for 30 years. Even after he began giving shiurim himself he did not leave his great rebbe. Rabbi Schussheim was humble, at once both simple and profound, and all of his aspirations were directed at attaining the truth. He desired neither honor nor greatness. He loved all and glorified the name of G-d in all of his ways and actions