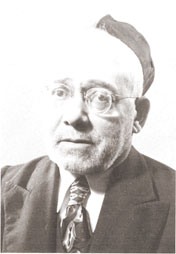 Rabbi Poleyeff was born in Timkovitz, near Slutsk in Minsk. He studied in the yeshiva in Slutsk, where he was one of the foremost student of Rabbi Isser Zalman Meltzer zt”l and was one of the editors of Yagdil Torah. He received semikhah from Rabbi Meltzer in 1910.

In 1920, he arrived in America and was immediately appointed a rosh yeshiva at Rabbi Isaac Elchanan Theological Seminary.

Rabbi Poleyeff taught thousands of students in his 46 years at Yeshiva. A gaon in Torah and an innovative thinker, he was known particularly for his warmth and love of his students. His well-received seforim, Orach Mesharim were posthumously reprinted in 1970 as a three-volume set.