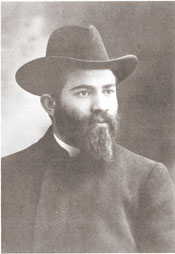 Rabbi Heller was born in Bialystok, Poland. A young prodigy, he became known throughout Russia and Poland as the Illui of Warsaw. He advanced so rapidly that, after age 10, he no longer studied under a teacher or rosh yeshiva. With his keen mind and extraordinary memory he acquired a rare, comprehensive knowledge of the entire Torah.

In 1912, he was appointed as rabbi and Av Beit Din in Lomza. In 1922, he moved to Berlin and founded Beit Midrash HaElyon, which attracted many rabbonim and gaonim, but the Nazi persecutions compelled him to come to America.

He published the classic edition of Sefer HaMitzvot L'Rambam and a two-volume work on Shulchan Aruch, Choshen Mishpat entitled LeChikrei Halachot. He also published writings in the various Torah journals. Rabbi Heller authored the sefer Nusach HaShomroni, as well as other works. He gave shiurim at Rabbi Isaac Elchanan Theological Seminary for a number of years covering all facets of Torah knowledge.