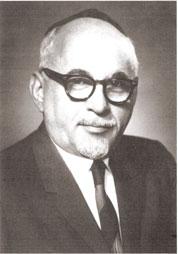 Rabbi Belkin was born in Soslovitz, Poland. He studied at the yeshiva in Mir and in Radin. He received semikhah from the Chofetz Chaim zt”l at age 17. In 1929, he came to America and while serving as rosh yeshiva in New Haven, Connnecticut (which eventually became Ner Yisrael in Baltimore), he studied ancient Semitic languages at Brown University and received a doctorate for his work on Philo.

He was appointed rosh yeshiva at Rabbi Isaac Elchanan Theological Seminary in 1935 when he was only 24, probably the youngest rosh yeshiva in the history of RIETS, and was appointed its president in 1943. He taught Torah and led the Yeshiva through a period of enormous growth until his passing.

In addition to his scholarly work on Philo and Philonic literature, Rabbi Belkin left many shiurim in their original form and published articles in various Torah journals.