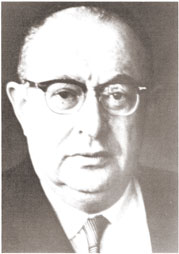 Rabbi Shatzkes was born in Evia, Vilna. His father was Rabbi Moshe Shatzkes zt”l. The younger Rabbi Shatkes studied at the yeshiva in Grodna with Rabbi Shimon Shkop zt”l, and then at the yeshiva in Mir. He received semikhah from Rabbi Tavil Meltzer zt”l, Rabbi Chanoch Henoch Agus zt”l of Vilna, author of the Marcheshet, and Rabbi Eliezer Yehuda Finkel zt”l, rosh yeshiva of Mir. In 1941, he came to America and was accepted as rabbi of Kehillat Chochmat Adam-Anshei Lomza in New York. In 1944, Rabbi Shatzkes was appointed a rosh yeshiva at Rabbi Isaac Elchanan Theological Seminary, where he taught for 40 years. His writings were published in various Torah journals. He left a sefer entitled Tifferet Aharon, which is still in manuscript form.