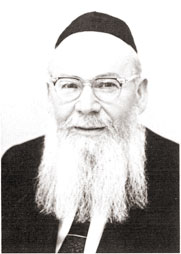 Rabbi Cyperstein studied at the yeshiva in Slobodka, where he was greatly inspired by the Sabah of Slobodka. He was among the students there who established the yeshiva in Hebron. After several years in Israel, he returned to Poland to study at the Mir yeshiva. He married the granddaughter of Rabbi Yitzchok Yaakov Reines zt”l and upon Rabbi Reines' death, succeeded him as the Lida Rav. He escaped to Shanghai during World War II and learned there bechavrusa with Rabbi Chaim Shmulevitz zt”l.

After the war, Rabbi Cyperstein came to New York and founded the Kollel Sridei Hacherev for outstanding refugee scholars at Rabbi Isaac Elchanan Theological Seminary. He was a rosh yeshiva there for 25 years, with a two-year hiatus from 1957-59 when he served as chief rabbi of Argentina.

At the end of his life, he moved to Israel where he died. He taught many students and published many Torah articles.