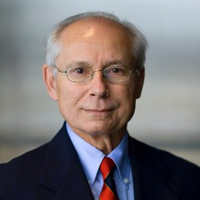 Joseph J. Levin, JD, will discuss his own personal history growing up Jewish in Montgomery, Alabama, in the era of Jim Crow and those events that drove him to co-found the Southern Poverty Law Center in 1971. He will then dig deeper into the early days of the SPLC and its progression from a solely litigation arm to a producer of anti-bias education, tracker of hate groups, promoter of immigrant, child, LGBTQ rights, and more. Mr. Levin will follow that with what the SPLC has observed in the current political and cultural landscape; the growth of racism, anti-Semitism, Islamophobia, homophobia, xenophobia and misogyny; and the roles of public officials. He will conclude with what he has observed in Jewish communities around the country over the past 3 ½ years and what Americans must do to fight bigotry and hate.

Levin has served the SPLC in various capacities since 1971, including legal director, chair of the board, president and CEO, and general counsel, retiring in 2016. He continues to serve the SPLC as an emeritus member of the board.

Why Wurzweiler for Continuing Ed?

Wurzweiler School of Social Work is currently offering continuing education opportunities that will appeal to professional social workers in diverse fields of practice. You can go anywhere, but why not try one, two, or three of our programs available to you at convenient times and locations? We know you will gain knowledge while satisfying your CE requirements. The name Wurzweiler is synonymous with Excellence. We look forward to seeing you there.

Wurzweiler is an approved provider of Continuing Education credits for licensed social workers by New York State and the ASWB. Learn more

As per New York State Continuing Education Guidelines, attendees must arrive on time and attend the ENTIRE workshop to receive their Continuing Education Contact Hours. Any attendees who arrive late or leaves early to a workshop WILL NOT receive their certificate, are not allowed admittance into the workshop, and are also not eligible for a refund in any way. Please check transportation schedules ahead of time and plan accordingly.