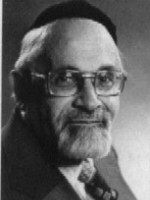 Rabbi Katz was born in Grodno, Poland to a renowned family of geonim. His father and first teacher, Rabbi Reuven Katz, authored Degel Reuven. Rabbi Katz and his family emigrated from Poland to the United States when he was twelve and then moved to Israel two years later, when his father was appointed Chief Rabbi of Petach Tikva. As a young boy, Rabbi Katz studied with Rabbi Shimon Shkop, zt”l and later in the Chevron Yeshiva with Rabbi Isser Zalman Meltzer, among others. He received his semicha from Chief Rabbi Yitzchak Isaac Herzog, Rabbi Meltzer, and the chief rabbi of Tel Aviv, Rabbi Avigdor Amiel.

In 1940, Rabbi Katz accepted a scholarship offer from then University President Rabbi Bernard Revel to attend Yeshiva College. There, Rabbi Katz became a talmid of Rabbi Moshe Soloveitchik. Upon graduation, in 1945, Rabbi Katz was appointed rosh yeshiva at RIETS and an instructor of Bible at Yeshiva College. He continued to teach at RIETS for almost sixty years, including more than thirty years as rebbe of the Hullin shiur. His doctoral thesis, written in 1963 and published in 1968, dealt with the commentary of Rabbeinu Meyuchas ben Eliyahu to Sefer Devarim. Rabbi Katz also served as rabbi of Congregation Petach Tikvah in the Bronx for 20 years.He subsequently published Rabbeinu Meyuchas ben Eliyahu to Sefer Vayikra.

Rabbi Katz’s humility, derech eretz, courtesy, and respect were legendary, as was his love for Torah, his talmidim, and his family. Rabbi Katz maintained a close relationship with many talmidim after they left his shiur, and he looked forward to keeping up with them, their wives, and their children.