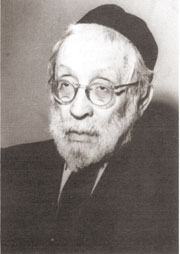 Rabbi Gerstenfeld was born in Rava-Russkaya in Galicia. He studied in the yeshiva at Klausenberg where he received semikhah from Rabbi Moshe Shmuel Glazner zt”l. He served as rabbi in England for 12 years.

After coming to the United States in 1916, Rabbi Gerstenfeld served as rabbi in Beit Haknesset Shomer Shabbat Nusach Ashkenaz in Brooklyn. In 1917, he was appointed a rosh yeshiva at Rabbi Isaac Elchanan Theological Seminary, where he taught for 40 years.

Rabbi Gerstenfeld, rare among his European peers of that time, also wrote in the English language with ease and style and published articles in various Torah journals as well as for the broader community.