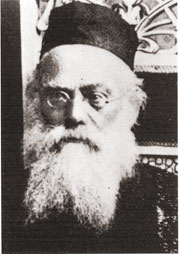 Rabbi Shkop was born in Toretz, Minsk. At age 12, he studied in the yeshiva in Mir for two years. He then traveled to Volozhin and studied with the Netziv zt”l. He was part of an extraordinary group of students with whom Rabbi Chaim Soloveitchik zt”l interacted.

In 1884, he became a ram at the yeshiva in Telshe, where he taught Torah for 18 years and became well-known for hi s style and distinctive chiddushim. In 1903, he was appointed rabbi of Meltch, replacing the gaon Rabbi Zalman Sander zt”l (who became rabbi in Krinki). In 1907, he became the rabbi of Breinsk, where he founded a yeshiva known as Yeshivat Rav Shimon Breinsker.

During World War I he remained in Breinsk, which was captured by the Germans, and helped assiduously to look after his townspeople. Since his yeshiva was forced to close during the war, he used his spare time to arrange his chiddushim and shiurim in a sefer. This is the popular Sharei Yosher, which was published in 1928.

In 1920, Rabbi Shkop was urged by the leading rabbis of the time, led by Rabbi Chaim Ozer zt”l of Vilna, to accept the position of rosh yeshiva of Yeshivat Sharei Torah in Grodna. Rabbi Shkop was successful in turning the yeshiva into one of the largest and most popular in Europe.

In 1928, he traveled to America in order to alleviate the difficult financial situation of his yeshiva and was received there with the highest honor. After the passing of the Meitscheter Illui, Rabbi Shlomo Polachek zt"l, he became a rosh yeshiva at Rabbi Isaac Elchanan Theological Seminary, where he taught for one year.

Although he wanted to remain, the leading rabbis of Europe, led by the Chofetz Chaim zt”l and Rabbi Chaim Ozer zt”l, felt it imperative for him to return to Grodna and to his yeshiva there. Rabbi Shkop answered their call, albeit with some misgivings. When World War II broke out, he moved with his yeshiva to Vilna, where he died shortly thereafter.