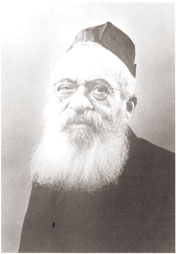 Rabbi Shatkes was born in Vilna. His father, Rabbi Avrohom Aharon Shatzkes zt”l, was known as the Illui from Mizetal. The younger Rabbi Shatkes studied under the guidance of his stepfather, Rabbi Yitzchok Blazer zt”l (known as Rav Itzele Peterburger). He studied at the yeshivotin Slobodka and Telshe and went on to receive semikhah from Rabbi Raphael Shapira zt”l of Volozhin, Rabbi Eliezer Gordon zt”l of Telshe, and Rabbi Elazar Rabinowitz zt”l of Minsk.

He served as rabbi of Lipnashek and Ivia, both in the Vilna district. In 1931, Rabbi Shatzkes was chosen to become rav and Av Beit Din of Lomza. Forced to flee when the Russians captured Lomza in 1940, he came to Vilna where he was appointed rosh yeshiva of the yeshiva in Grodna, succeeding Rabbi Shimon Shkop zt”l.

In 1941, he reached America by way of Japan, and was appointed a rosh yeshiva at Rabbi Isaac Elchanan Theological Seminary, where he taught hundreds of students until his death. In 1910, he published a pamphlet entitled Anaf Pri, containing his chiddushim on the Pri Yitzchok of Rabbi Yitzchok Blazer.