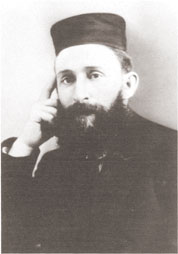 Born in Birzh, Kovno, Rabbi Preil studied in Shadova, Telshe, and Slobodka, where he particularly excelled. In 1907, he was sent by the yeshiva in Telshe to London, and then became rabbi of Manchester. In 1911, he came to America and was appointed rabbi in Trenton, New Jersey.

In 1912, he was chosen to be a rosh yeshiva at Rabbi Isaac Elchanan Theological Seminary, and taught there until 1922. He was appointed rabbi of Elizabeth, New Jersey, in 1919 where he served until his death. This gaon, who was known for his righteousness, was very active in the Agudath HaRabbonim of America. He was also instrumental in the establishment of Ezras Torah and other charitable institutions.

In addition to contributing many writings to various Torah journals, Rabbi Preil authored Sefer HaMaor, a two-volume work on halakhah and aggadah.