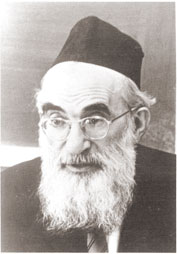 Born in Minsk, Rabbi Lifshitz was a foremost student of Rabbi Shimon Shkop zt”l in Grodna. After leaving Grodna, he continued his learning in Yeshivat Mir, where he became well known as an outstanding scholar. In 1933, he married Tzipporah Chava, the daughter of Rabbi Yosef Yoselowitz, rabbi of Suwalk. Two years after his marriage, Rabbi Yoselowitz passed away and Rabbi Lifshitz succeeded him as rabbi of that city, then one of the most important centers of Jewish life.

He remained there until the Nazis captured Suwalk in 1940. In 1941, he reached America along with his wife and daughter, and was appointed a rosh yeshiva of Beit Midrash LeTorah in Chicago. Rabbi Lifshitz developed a strong connection with his fellow rabbanim, his students and the rest of the Chicago community. His reputation as an outstanding rosh yeshiva spread throughout America and he received offers for several positions. He accepted the invitation of Rabbi Samuel Belkin zt”l and, in 1944, was appointed a rosh yeshiva at the Rabbi Isaac Elchanan Theological Seminary.

There he taught Torah for almost 50 years to thousands of students, many of whom came to be known as “Reb Dovid’s students.” His efforts on behalf of the community were numerous. He served as a member of the presidium of the Agudath HaRabbonim of America and Canada for many years. During the final 17 years of his life, he served as president of Ezras Torah.

His discourses in chochma and mussar were compiled and published by his students and given the title Tehillah LeDovid. His shiurim on the Talmud were also published as Shiurei Rav Dovid Lifshitz.

Biography from the Yated Ne’eman

Hesped for Rav Dovid from the Jewish Observer 1

Hesped for Rav Dovid from the Jewish Observer 2

Flyer for the 20th Yartzheit at YU and Recording