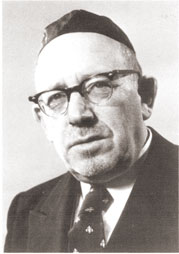 Rabbi Burack was born in Popilan, Kovno, and studied in the yeshivot of Telshe and Slobodka, where he received semikhah. When he came to the United States in 1914, he became rabbi of the Beit Hamedrish Etz Chaim Anshei Volozhin in New York City and then at Congregation Tehillim Ohel Moshe in Brooklyn, where he served for more than four decades.

In 1919, he was appointed a rosh yeshiva at Rabbi Isaac Elchanan Theological Seminary, where he taught thousands of students until his death.

Rabbi Burack published his writings in many Torah journals. He also authored the sefer Pirchei Aharon, a two-volume work on halakhah and aggadah. He was a leading figure in the Agudath HaRabbonim and Mizrachi, and particularly distinguished for his flowery and fiery oratory which greatly inspired his audiences.