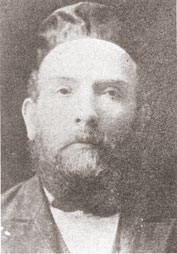 Rabbi Alperstein was born in Kobrin, Horodna. He obtained an extraordinary knowledge of the Talmud Bavli and the Talmud Yerushalmi. He served as a rabbi in Novogorod, Vilna, for several years and, in 1881, came to the United States and became rabbi of Khal Adath Jeshurun in New York.

In 1884, he went to Chicago to take another rabbinic pulpit and, in 1889, to St. Paul. He returned to New York in 1901 and served as spiritual leader of Congregation Mishkon Yisroel. He was one of the founders of the Agudath HaRabbonim of America.

Rabbi Alperstein has the distinction of being the first rosh yeshiva of Rabbi Isaac Elchanan Theological Seminary. Upon his death, his wife founded in his memory the Beth Abraham Home for the incurably sick in the Bronx which, today, is the Beth Abraham