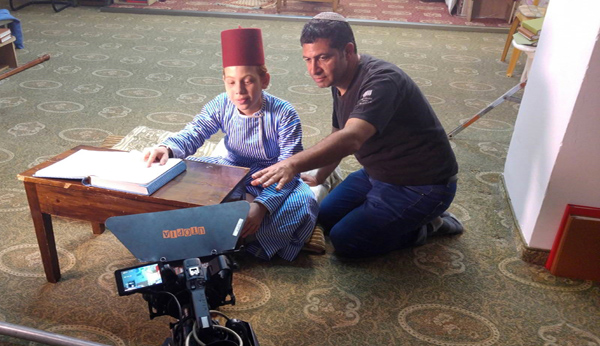 The Israelite Samaritans Project of the Yeshiva University Center for Israel Studies is a multifaceted exploration of the Samaritans, the decendants of the biblical northern tribes of Israel.  Today a micro-people of 850 individuals, residing on the Samaritan holy mountain, Mt. Gerizim, and in the Israeli city of Holon, the Samaritans have an outsized place in western culture for Jews, Christians and Muslims.

The Israelite Samaritans Project will culminate in a major traveling exhibition organized a traveling exhibition developed with Yeshiva University Museum (opening Fall, 2021), a full length documentary by film maker Moshe Alafi, an exhibition volume (EJ Brill), a cook book (Wipe and Stock), a book for children, a catalog of Samaritan Manuscripts at YU Libraries and eventually a free online course courses and student field work with the Samaritans.

The Israelite Samaritans Project is sponsored by the Leon Charney Legacy Fund, with many thanks to our friend Tzili Charney.

The first two events of this international collaboration took place at the University in November, 2018.  On Tuesday, November 13, Benyamim Tsedeka, director of A-B Center for Samaritan Studies in Holon, Israel, spoke on the history and traditions of the Samaritans in Gottesman Library, where he spoke about the traditions of these descendants of the northern tribes of Israel and their connection to manuscripts housed in the library’s Special Collections.

Tsedaka's catalog of Samaritan Manuscripts in Gottesman Library Special Collections is due out next year.

“Benyamim is a true marvel,” said Dr. Steven Fine, Dean Pinkhos Churgin Professor of Jewish History and director of the CIS.  “His commitment to sharing the inner life of his people is inspiring. I am thrilled to welcome him back to our campus.”

Tsedaka’s lecture was filmed for our forthcoming  documentary on the Samaritans produced by Moshe Alafi, a widely regarded Israeli filmmaker and producer.

This documentary is a centerpiece of the YU Israelite Samaritan Project of the CIS, produced in partnership with the New Fund for Cinema and Television and funded by the Leon Charney Legacy Fund of the Center for Israel Studies.

While on campus, Alafi offered programs about his work and career choices, including “Film and the Public Interpretation of Jewish History” “How I Became a Jewish Filmmaker.”

“CIS is incredibly excited that Alafi filmed and spoke at YU,” said Dr. Fine.  “I am ecstatic that we are creating a full-length documentary about the Samaritans. This is Torah uMadda at the cutting edge!”