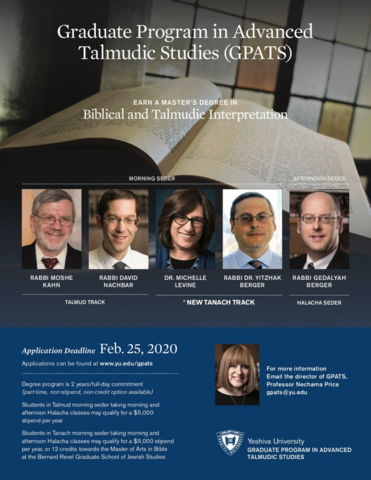 Rabbi Moshe Kahn graduated from Yeshiva College in 1972 and received semicha in 1975 and Yadin Yadin in 1979. He taught Talmud and Jewish law at the James Striar School of General Jewish Studies for 11 years and at the Drisha Institute for 27 years. In 1983 he began teaching Talmud and Jewish law at Stern College for Women, where he presently continues to teach. Currently he is also teaching Talmud at the Graduate Program of Advanced Talmudic Studies (GPATS). He has been teaching at GPATS since its inception. In addition he is a New York State Licensed Psychoanalyst in private practice.

Rabbi David Nachbar received his semicha from RIETS and continued his studies as a member of the Bella and Harry Wexner Kollel Elyon of Yeshiva University. He holds a master’s degree in medieval Jewish history from the Bernard Revel Graduate School of Jewish Studies. Rabbi Nachbar currently serves as a maggid shiur to the Master’s Program in Biblical and Talmudic Interpretation at Stern College for Women and as a Judaic studies faculty member at TABC.

Dr. Michelle Levine is Associate Professor of Bible at Stern College for Women at Yeshiva University, where she has taught since 2001. She holds a BA, summa cum laude with honors, from Brooklyn College, an MS in Bible from the Bernard Revel Graduate School of Jewish Studies, and a PhD in medieval biblical exegesis from New York University; her dissertation was awarded doctoral fellowships from the National Foundation for Jewish Culture and the Memorial Foundation for Jewish Culture. Dr. Levine also studied for two years at Michlalah Teacher’s College in Israel. Dr. Levine is the author of Nahmanides on Genesis: The Art of Biblical Portraiture, which is based on her dissertation, published by Brown University Press (2010). She has published numerous articles and delivered academic papers on topics in Tanach and medieval biblical exegesis. Dr. Levine lectures widely across the United States and in Israel on various topics of the Bible and biblical commentaries.

Rabbi Dr. Yitzhak Berger is Associate Professor and Head of the Hebrew Division at Hunter College of the City University of New York, and an instructor at the Drisha Institute for Jewish Education. He received his Ph.D. and Rabbinical ordination from Yeshiva University. His published work concentrates on the literary study of the Bible and on medieval biblical interpretation. Recently, he has published a series of articles on literary allusions in the books of Ruth and Esther, and his study on the book of Jonah is forthcoming by Indiana University Press. He serves on the Board of Directors of the AJS and on the Steering Committee of the Orthodox Forum.

Rabbi Gedalyah Berger serves as a Ra"M in the Graduate Program for Women in Advanced Talmudic Studies at Yeshiva University, and as a maggid shi'ur at the Yo`etzet Halakhah program of Nishmat's Miriam Glaubach Center. He recently joined the Orthodox Union as Adult Education Coordinator in the Dept. of Synagogue Services; before joining the OU, he served for 15 years as Rabbi of Fleetwood Synagogue in Mount Vernon, NY.  Rabbi Berger graduated from Yeshiva College in 1994 with a B.A. in physics, studied for three years at Yeshivat Har Etzion in Israel under the tutelage of HaRav Aharon Lichtenstein zt"l, received his semikhah from RIETS in 1998, and was a fellow of RIETS's Bella and Harry Wexner Kollel Elyon. He was Northeast Vice President of the Rabbinical Council of America from 2013-2015, and currently serves on the RCA’s Executive Committee.

Dean Karen Bacon is the Mordechai D. Katz and Dr. Monique C. Katz Dean of the Undergraduate Faculty of Arts and Sciences at Yeshiva University.

Director of GPATS: Nechama Price serves on the Judaic Studies faculty in Stern College teaching courses in Tanach and Halacha. She graduated from Stern College and received her master's in Jewish education from the Azrieli Graduate School of Jewish Education and Administration and a master's in Bible from the Bernard Revel Graduate School of Jewish Studies. Nechama is both the director and an alumna of the Stern College Graduate Program of Advanced Talmudic Studies (GPATS). She also serves as a Yoetzet Halacha in Englewood, Tenafly, West Orange, Livingston and Long Branch, and regularly gives shiurim throughout the greater New York area.