Populism and the Presidential Election of 1828 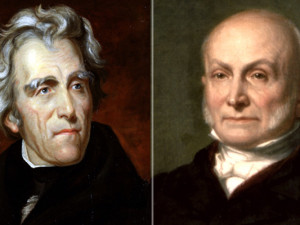 On Monday, November 14, nearly a week after the 2016 presidential election results--viewed by many as an unprecedented triumph for populism--nearly 300 people gathered at Congregation Shearith Israel on Manhattan’s Upper West Side to hear Straus Center Director Rabbi Dr. Meir Soloveichik deliver a lecture titled "Electoral Earthquakes in American History: Lessons from the Age of Jackson."

“Imagine an election between two candidates,” said Soloveichik, setting the scene. “One candidate is a former secretary of state, is celebrated for having extraordinary experience, and is touted as the most qualified presidential candidate ever. And this person runs against an individual who’s seen by many as violent and vulgar and leading a mass populist movement that is entirely changing the nature of democracy. This person counters that this secretary of state is an elitist, and has attained power because the system is rigged.

“Ladies and Gentlemen,” Soloveichik continued, “I give you the election of 1828.” That year, to the nation’s shock, Andrew Jackson won the presidency from John Quincy Adams in a landslide victory.

Soloveichik, who refused to discuss his personal political views or whom he voted for, argued that the 2016 election, while surprising to some, is not without precedent; rather, the kind of populism we witnessed over the past year and a half has been part of the America’s “political DNA” since the Jackson-Adams presidential race.

Adams and Jackson first ran against each other in 1824, but neither won the electoral college. Ultimately, Speaker of the House Henry Clay decided the outcome. He saw Jackson as dangerous, and “threw his lot in with Adams,” explained Soloveichik. President Adams appointed Clay as his Secretary of State--and Jackson claimed the election had been rigged. An investigation found no wrongdoing on Clay’s part, but the “optics” were not good.

In 1828, Adams and Jackson squared off again. Quiet, dignified Adams was the more experienced candidate, having been groomed for politics since his youth. Jackson, on the other hand, had married his wife before she was divorced from her first husband, had a history of bloody duels (in which he killed a man in cold blood) and was renowned for his aggressive war tactics. Adams helped negotiate the treaty of Ghent, which ended the War of 1812, while Jackson was responsible for the capture and killing of 700 enemy British soldiers towards the end of the same conflict. (Jackson saw this as revenge for the death of his brother during the Revolutionary War.)

But there was a new element at play in the election process of 1828: the electorate had expanded dramatically, and it would be the people, rather than the heads of state legislatures, who would decide the election’s outcome. While Adams was “uncomfortable with large crowds,” Jackson, an impulsive, civil libertarian, had “the common touch.” Jackson won, becoming what Soloveichik described as “the first populist president.”

“Those who supported Jackson said that you don’t need book learning to be a good president,” said Soloveichik.

Soloveichik noted that the way Jacksonianism encouraged individual identity formation influenced various subcultures in the United States. For example, Jewish diplomat Mordecai Manuel Noah (1785-1851), one of Jackson’s supporters, Noah founded a colony in northern New York called “Ararat.” Noah advertised the colony as a homeland and haven for Jewish immigrants from around the world (however, only a few thousand Christians and a smattering of Jews turned out to be interested in the project!). Meanwhile, Joseph Smith founded a whole new religion, Mormonism.

Soloveichik acknowledged that the history of Jacksonianism has had political and moral failures as well as triumphs. On the negative side, for instance, Jackson took action that harmed Native Americans. On the positive side, President Harry S. Truman, who viewed Jackson as a hero, acted with Jacksonian impulsiveness in recognizing the State of Israel (against the wishes of many of his political advisers) in 1948. Similarly, Jacksonianism can be discerned in contemporary Christian American support for the State of Israel.

“We’ve had several Jacksonian presidents, and we’ll have many more,” predicted Soloveichik, who called the idea that the 2016 election spells the end of America “ridiculous.”

“The American republic endures,” said Soloveichik, noting that the first ever American Thanksgiving of 1789 was a “celebration of the Constitution,” thanking God for constitutional rights. Soloveichik also mentioned the durability of the system of checks and balances set up by the country’s Founding Fathers, and described Adams’ remarkable campaign against slavery as an official in the House of Representatives following his presidential defeat.

“In American history, we don’t know what is yet to come,” said Soloveichik. “So much of history focuses on contingencies...Despite all the chaos, life goes on. We pray that Ha-Kadosh Baruch Hu [the Holy One Blessed Be He] grants wisdom to all our leaders, and that they receive the right advice from all their advisors.”

The lecture was co-sponsored by the Straus Center's Program on Early America and the Jews.