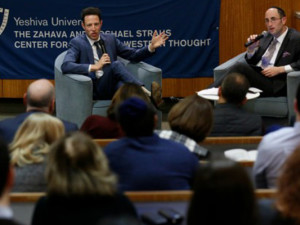 Archival evidence indicates that American Founding Father Alexander Hamilton (1745-1804) was born and raised as a Jew, argued Oklahoma University Assistant Professor of Law Andrew Porwancher on November 21, at an invitation-only event marking the inauguration of the Zahava and Moshael Straus Center for Torah and Western Thought’s new program on “Early America and the Jews.”

Porwancher’s research, Soloveichik noted, is “an important study in the art of scholarship itself.” Porwancher, who began work on this project before Lin Manuel Miranda’s musical on Hamilton premiered and will spend his upcoming sabbatical continuing his research at the Straus Center, recounted several facts of Hamilton’s life that are well known. For example: Hamilton’s mother Rachel had been married to man named Johann Levine on the Danish-controlled, Caribbean island of St. Croix before commencing her relationship with Hamilton’s father, James, on the British-controlled island of Nevis, and young Alexander had attended Nevis’s Jewish school. However, previous historians have dismissed the possibility that Alexander Hamilton might have been Jewish, arguing that Johann Levine was not described in Danish records as a Jew, that Rachel Levine herself was never Jewish, and that Hamilton had only attended a Jewish school because his illegitimate birth disqualified him both from being baptized and from attending a Christian school.

But Porwancher was not convinced. “I've always thought that Alexander Hamilton was Jewish," said Porwancher, "because if not, he would have to be the first person in history whose mother was named Rachel Levine, and who went to a Jewish school, but who wasn't Jewish.” But his hypothesis was driven by more than intuition: he noticed a curious dearth of evidence in the footnotes where previous generations of historians had denied Hamilton’s Jewish connection.

Porwancher’s search for information led him to St. Croix and Nevis, where he discovered documents that further fueled his suspicions. He found that Johann Levine is indeed not marked as a Jew in the St. Croix records, none of the Jews there (even well-known ones) were recorded as such; it was simply not a designated category in the island’s registers; furthermore, Hamilton’s own grandson referred to Johann Levine as a “rich Danish Jewish.” Additionally, Porwancher found parish records from Nevis (whose free population was 25% Jewish) which record the baptism of several babies explicitly noted as illegitimate--indicating that Hamilton’s out-of-wedlock status would not have prevented the performance of this rite. Geography need not have dictated his attendance at the Jewish school--where, according to his son’s writings, he had learned to recite the Ten Commandments in Hebrew--as there existed an Anglican school just down the road. Furthermore, Porwancher discovered that Danish law at the time of Rachel and Johann Levine’s wedding forbade civil marriages between Jews and Christians; for the two to legally marry, Rachel--who was later buried at home and not in the local church’s cemetery--would have had to convert to Judaism. (Porwancher believes that the other pieces of evidence indicate that the conversion did not go the other way.) If Rachel did convert to Judaism prior to her marriage, as Porwancher suspects, it would mean that Alexander Hamilton was born a Jew according to Jewish law.

Porwancher theorized that Hamilton’s ties to Judaism were severed at the age of 13, when his mother died (although there is no record of his ever having been baptized). “He wasn’t going to tie himself to a second class religious status,” opined Porwancher.

Yet, Porwancher believes that Hamilton’s connection to Judaism was discernible over the course of his well-documented career, both before and after serving as the first Secretary of the Treasury of the United States (1789 to 1795). For instance, Hamilton studied the history of European Jewish banking while fighting in the American Revolution and serving as George Washington’s aide-de-camp, coming up with the ultimately successful idea to finance the American Revolution through credit. Hamilton was also the only Founding Father (alongside Aaron Burr) willing to represent Jewish clients; he gave a three-hour speech, the most “emotionally invested” of his career, before the New York State Assembly while defending a French Jew who had been falsely charge of fraud (the prosecutor’s remarks had utilized antisemitic stereotypes). And, in his copy of George Washington’s Farewell Address, Hamilton included the notion of religion and religious liberty as “crucial to the vitality of America,” explained Porwancher.

The Straus Center’s program on Early America and the Jews, made possible by the generosity of Rob and Ellen Kapito, will develop ongoing programs that examine the influence Hebraic concepts on America’s Founding Fathers. "I've always been interested in early American Judaism, and Rabbi Soloveichik has a way of bringing it to life," explained Kapito. "It's fun and meaningful, and people can relate to it."