An Election to Remember 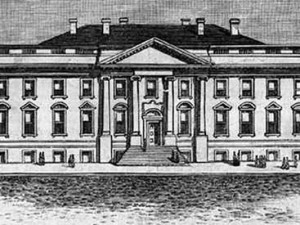 On November 7, the eve of one of the most contentious presidential elections in United States history, over 250 people gathered at Manhattan’s Congregation Shearith Israel to hear Straus Center Director Rabbi Dr. Meir Soloveichik deliver a special American history lecture, titled “The Election of 1800: Negative Campaigning, Politics, and the Jews.” Audience members received a thick packet of primary and secondary sources pertaining to this dramatic election, which saw Federalist candidate and sitting President John Adams battle the Democratic-Republican candidate and sitting Vice President Thomas Jefferson for the country’s highest office.

Soloveichik welcomed the unexpectedly large crowd, which filled all the chairs in the synagogue social hall and spilled into the entranceway, with wry humor that acknowledged the tenseness of the pre-election atmosphere. “Two hundred and forty years is a pretty good run for any democracy,” quipped Soloveichik, eliciting raucous, cathartic laughter from the audience. “But seriously, whatever side of the political divide you find yourself, I think we can agree that this has been a depressing election season.”

However, it is not the first time that America has been deeply politically split. “In the election of 1800, half the country hated the other half and vice versa, and claimed that if the other side won the election, the country would be over,” said Soloveichik, referencing the work of modern historians Edward Larson, David McCullough, and Howard Rock. In fact, Jefferson went so far as to hire what Soloveichik described as “the first hatchet man” in American political history: James Callender, who, with Jefferson’s covert approval, anonymously hurled accusations against Adams that sent shockwaves through the nation. Each side attacked the opposing candidate’s personality, accusing him of immoral or illicit behavior.

Soloveichik described the hot-button issues surrounding the 1800 election: the emergence of a two-party political system; the recent war between France and Britain that the United States narrowly decided to sit out; the consequent raiding of American ships by France; the Alien and Sedition Acts of 1798; and the controversy over how long an American president should be allowed to rule (Alexander Hamilton believed that the president should remain in office for life, which Jefferson opposed).

Soloveichik noted that American Jews at the time were “by and large Jeffersonians,” and argued that the support of New York City’s Jewish community played a critical role in electing Jefferson to the White House. New York State was key to deciding the election results on a national scale, and New York City, which voted as a bloc, was key to deciding the outcome of New York State. Within New York City, Jefferson beat Adams by a mere 250 votes. “Therefore, it’s not too much to say that the several hundred Jews in New York that largely supported Jefferson’s victory were an important part of the result,” stated Soloveichik.

Federalists were aware of Jewish support for Jefferson, and some considered it a further strike against the Republicans. One Federalist journalist included anti-Semitic stereotypes in his satirical depiction of Benjamin Nones, a Congregation Shearith Israel leader and member of the Democratic Society (a Republican political group). In response, Nones published an article defending his support for Jefferson:

“In republics we [Jews] have rights, in monarchies we live but to experience wrongs. And why? Because we and our forefathers have not sacrificed our principles to our interest, or earned an exemption from pain and poverty, by the dereliction of our religious duties, no wonder we are objects of derision to those who have no principles, moral or religious, to guide their conduct.” (Irving J. Stone, ed., The Jews in America 1621-1977 (1978), 75-77.)

For Soloveichik, this “amazing letter” is a testament to American Jewish security at the time; even while experiencing antisemitism, Nones felt “comfortable enough in his society not only to respond, but to link the American idea to his Jewishness.”

However, Soloveichik pointed out an irony in the Jews’ involvement in the 1800 election: of the two candidates, Adams liked Jews and Jefferson did not. (In a 1798 letter to John Taylor, Jefferson referred to the Jews’ “perversity of character.”) Soloveichik opined that this example cautions individuals not to “idolize” their preferred political candidates--as is the tendency in politics--even as they fight for the causes they believe in.

At the close of the lecture, Soloveichik offered several takeaways from the saga of 1800: that controversy, partisanship, and sometimes even instability are inherent to any democracy; that political parties may fall apart, but the Jewish people is eternal, and what we do today will be studied 200 years from now; that antisemitism is “a virus that rears its head especially in times of turmoil,” and that it is our obligation to respond -regarding Israel or the false charge of dual loyalty occasionally leveled at American Jews even in mainstream publications - “not only as Jews, but as Americans.” Heading into tomorrow’s election, Soloveichik said, “We invigorate ourselves as Jews and as Americans, and we pray that God bless America.”

The lecture was co-sponsored by the Straus Center's Program on Early America and the Jews.