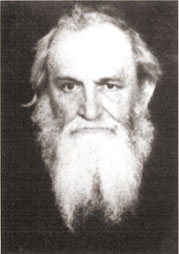 Rabbi Soloveitchik was born in Volozhin. He studied there with his father, Rabbi Chaim Halevi zt”l, until the yeshiva closed in 1892. He then moved to Brisk where his profundity and sharpness of mind became well known.

At age 23, he married the daughter of Rabbi Eliyahu Feinstein zt”l, renowned rabbi of Pruzhan. He lived with his father-in-law in Pruzhan for several years . At age 31, he became rabbi of Rasin (Kovno district), replacing Rabbi Alexander Moshe Lapidus zt”l. He established a yeshiva there and, in 1913, was appointed rabbi in Choslovitz, Smolensk, where he served for eight years.

In 1918, his father, Reb Chaim, passed away in Brisk. However, the war that was still raging did not allow him to respond positively to the requests ofthe community leaders that he take his father's place. Instead, his younger brother, Rabbi Yitzchok Zev zt”l, succeeded Rav Chaim. When Rav Moshe later arrived in Brisk in 1921, he did not wish to force his brother out of the position he had already assumed and, instead, accepted the offer of Mizrachi in Warsaw to become rosh yeshiva of Beit Midrash L'Rabbonim (the Tachkemoni Yeshiva). He taught there from 1922-29.

In 1929, Rabbi Soloveitchik was summoned by Rabbi Bernard Revel and the leaders of Rabbi Isaac Elchanan Theological Seminary to come to America and become a rosh yeshiva in their Yeshiva. He accepted the position and gave shiurim there for 12 years, teaching hundreds of students. When he passed away, his son and student, Rabbi Yosef Dov Halevi Soloveitchik zt”l, succeeded him as rosh yeshiva.

His writings were published in the sefer Kovetz Chiddushei Torah, a compilation of his writings in various Torah journals.