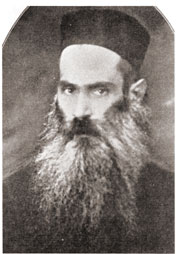 Rabbi Polachek was born in Sinichinitz, near Meitschet, Grodna. He was brought to Volozhin before he reached the age of 12. Referred to as the Meitscheter Illui by Rabbi Chaim Soloveitchik zt"l, his bar mitzvah lecture, which he delivered in the yeshiva, made a memorable impression. He remained at the yeshiva in Volozhin until it closed in the winter of 1892 then went to learn in Brisk with his mentor, Rabbi Chaim Brisker zt"l.

Rabbi Polachek remained in Brisk for four years and then transferred to Yeshivat Knesset YisroeI in Slobodka. Rabbi Chaim Soloveitchik said that in all his life he had never come upon a genius of the measure of the Meitscheter. Afterwards, he joined a group of specially selected students in Vilna headed by Rabbi Chaim Ozer zt"l.

In 1905, when the Yeshiva of Lida was founded by Rabbi Yitzchok Yaakov Reines zt”l, Rabbi Polachek was asked to be a rosh yeshiva, and he taught Torah there until the outset of World War I. In 1921, he was accepted as the rosh yeshiva of Tachkemoni in Bialystok.

After a year he received Rabbi Dov Revel's invitation to become a rosh yeshiva at Rabbi Isaac Elchanan Theological Seminary, arriving in America in 1922. He taught at the Yeshiva for six years and was greatly revered there. He was also active in the Agudath HaRabbonim of America and in Ezras Torah.

In 1928 he passed away suddenly. Rabbi Meir Berlin zt”l said that as great as he was in Torah, Rabbi Polachek stood out seven measures more in the greatness of his character.