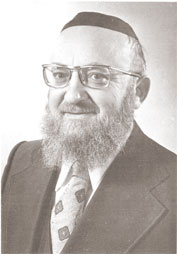 Rabbi Alpert, one of the most prominent and celebrated students of Rabbi Moshe Feinstein zt”l, was counted among the most distinguished rabbonim in this country. He was the son of Rabbi Shabbtai Alpert zt”l, the rabbi of Plonk in Lithuania, who was the nephew of the Chofetz Chaim zt”l.

Upon his arrival in America, Rabbi Alpert immediately entered Yeshivat Tiferet Yerushalayim. He had the privilege of developing a close relationship with Rabbi Moshe Feinstein. After receiving semikhah from Rabbi Feinstein, Rabbi Alpert accepted a position as rebbe at Yeshivat Tiferet Yerushalayim and then, in 1967, was appointed a rosh yeshiva at the Rabbi Isaac Elchanan Theological Seminary. He was the first rosh kollel of the Kollel L’Horaah Yadin-Yadin established by RIETS to prepare poskim.

In his later years, Rabbi Alpert also served as the spiritual leader of Agudath Yisroel of Far Rockaway. He was previously rabbi of Kehillat Chevrat Bochurim on the East Side for many years.

abbi Alpert was a renowned talmudic scholar and left behind many distinct novellae in Torah and halakhah. He published the Beit Habechirah of the Meiri on Bava Metzia, along with his own scholarly notes. In addition, he compiled a commentary of the Raavad on Bava Metzia. Other published writings of his include Limmudei Nissan on the Torah, as well as on Tractate Beitzah.

Rabbi Alpert was also known as an extraordinary darshan—a preacher who was able to excite his audience. Only a short while before his own passing, he delivered an emotional eulogy at the funeral of his rebbe, Rabbi Moshe Feinstein zt”l, and his audience was able to sense that this premier talmid would soon, tragically, join his great teacher. Rabbi Alpert passed away at the age of 58 and was laid to rest on Har Hazaitim in Jerusalem.