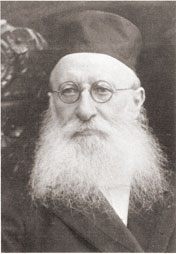 Rabbi Margolies was born in Krozh, Kovno. At age 15, he studied with and attended to his uncle, Rabbi Dovid, Av Beit Din in Maurotsh. He received semikhah from Hagaon Baal Oneg Yom Tov Rabbah of Bialystok under whose tutelage he remained for some time. He served as rabbi in Slobodka for 12 years.

In 1889, he was called upon to serve as chief rabbi in Boston. Afterwards, he became rabbi of Congregation Kehillath Ieshurun in New York City, where he remained for 31 years until his death. He was one of the great rabbinical figures and spiritual leaders in America, and a founder of the Agudath HaRabbonim of America.

Rabbi Margolies, along with Rabbi Hillel Klein zt”l, Rabbi Shmuel Tzvi Wien zt”l, and Rabbi Dov Aryeh Hacohen Levintahl zt”l, constituted the first semikhah board established by the Rabbi Isaac Elchanan Theological Seminary in 1906. Rabbi Margolies, who became known by his acronym RAMAZ, served as president of the Yeshiva for a short time (in 1906), and over the course of many years contributed significantly to the success and growth of the Yeshiva.