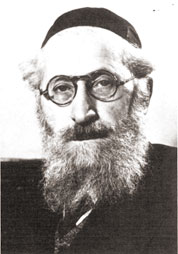 Rabbi Zaks was born in Shidlova near Keirn. He studied in Yeshivat Knesset Beit Yitzchok in Slobodka and then in Radin under the Chofetz Chaim zt”l. During World War I , he studied under the brother-in-law of Rabbi Chaim Ozer zt”l, Rabbi Reuven Dov Dessler zt”l in Hemmil.

After the war, he returned to Radin to study with the Chofetz Chaim, where he gained most of his Torah knowledge. In 1922, the Chofetz Chaim chose him as his son-in-law. Rabbi Zaks had an extraordinary memory, a pure mind, and was an expert in the Talmud and its commentaries. In 1926, he was appointed rosh yeshiva in Radin and the president of the Kollel Kodshim of the yeshiva in Radin where he taught thousands of students until 1940.

During the Holocaust, he escaped with the yeshiva to Vilna. Miraculously, he was saved and he came to America in 1941 where he put all his efforts into rescue work. In 1943, he founded Yeshivat Chofetz Chaim of Radin in New York, and renewed the Kollel Kodshim there. In 1946, he was appointed a rosh yeshiva and bochen at Rabbi Isaac Elchanan Theological Seminary. He passed away in Jerusalem in 1974.