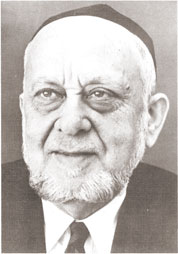 Rabbi Steinberg was born in Ostrolenka, Poland. He studied at yeshivot in Lomza and Slobodka, and was among the outstanding students of Rabbi Dovid Tavil Meltcher zt”l and Rabbi Raphael Volozhiner zt”l. He received semikhah from Rabbi Shimon Shkop zt”l and again, in this country from Rabbi Yosef Rosen zt”l of Passaic, New Jersey.

He arrived in the United States in 1921 and was immediately appointed a rosh yeshiva at Rabbi Isaac Elchanan Theological Seminary. There he taught Torah to hundreds of students until 1970.