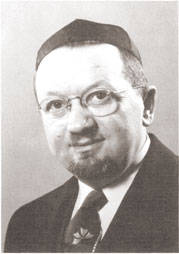 Rabbi Arnest was born in Aniksht near Telshe, Lithuania. He was one of the youngest students of Rabbi Boruch Ber Leibowitz zt”l (still in Krementzog during World War I). Afterwards, he studied at the yeshiva in Telshe together with Rabbi Eliyahu Meir Bloch zt”l.

On the recommendation of Rabbi Avraham Shapiro zt”l, rabbi of Kovno, he was brought by Rabbi Bernard Revel zt”l to give shiurim at Rabbi Isaac Elchanan Theological Seminary in 1938. Rabbi Arnest served as a rosh yeshiva there and taught hundreds of students until his passing.

A gaon in Torah, Rabbi Arnest authored two seforim, Lev Yosef and Torat Eretz Zvi. He also authored a commentary called Chiddushim ViHearot At Teshuvot HaRambam, which was published in the Shulzinger edition of the Rambam. In addition, he published widely in various Torah journals.