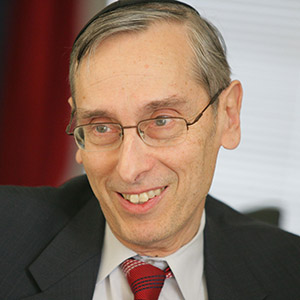 Ruth and I. Lewis Gordon Professor of Jewish History; Dean of the Bernard Revel Graduate School of Jewish Studies

Professor David Berger was, for many years, Broeklundian Professor of History at Brooklyn College and the Graduate Center of the City University of New York and cochair of the Academic Advisory Committee of the National Foundation for Jewish Culture. He is a fellow of the American Academy for Jewish Research and a member of the Council of the World Union of Jewish Studies. He has been a fellow of the Annenberg Research Institute, a visiting scholar at the Institute for Advanced Studies in Jerusalem, and a visiting professor at Yale University and Harvard University. From 1998 to 2000, he served as president of the Association for Jewish Studies.

Professor Berger is the author of The Jewish-Christian Debate in the High Middle Ages, which was awarded the John Nicholas Brown Prize by the Medieval Academy of America; The Rebbe, the Messiah, and the Scandal of Orthodox Indifference, which received the 2003-2004 Samuel Belkin Literary Award; and co-authored Judaism's Encounter with Other Cultures: Rejection or Integration?, a finalist for the Jewish Book Award in Jewish Thought. He has written widely on medieval Jewish history, Jewish-Christian relations, antisemitism, contemporary Judaism, and the intellectual history of the Jews.